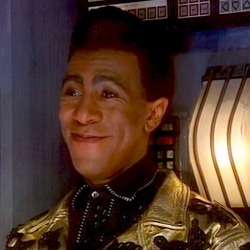 Welcome to my non who topic feature on the blog. Once a month, I will choose a topic not related to Doctor Who and share my thoughts. January’s edition is celebrating a character who will be returning for a movie in 2020. This is the Cat from Red Dwarf played by Danny John Jules who you may know from MI High and the Story Makers. Here are thing I love about the Cat:

One of two characters to have appeared in every episode

The Cat along with Dave Lister played by Craig Charles has been in every episode & that means loads of comic meets with the Cat as well so that a good thing about the character.

Double crossed Rimmer in the elections

I love the Cat giving Rimmer a lesson in double crossing him after they lost he election to Kryten and Lister in Mechoracy after threatining to tell the others that Cat that needed glasses to entise him into his running mate. The Cat locks Rimmer in the Garbage Hold with as Lister describes it as the annoying toaster, talkie Toaster. Plus Cat reveals the glasses make him smarter when he tells the others himself (THAT’S MY BOY!”) and he followers Lister’s advice and blends the glasses and I prefer the Cat being cooler.

I love the Cat for this as he struggles but he uses it in a dangerous situation to save his friends which is successful.

Here is an extract on what I wrote on Tumblr

“Telford attempted to make Cat turn on Lister, Kryten & Rimmer & kill them & escape the Storm but Cat learnt from his poker games to do a poker face & kills Telford. It’s violent but it’s a good example.”

Thi is a heroic moment for the Cat even though it should have ben done in earlier series but WE GOT IT.

I have huge love for his outfits, especially the ones in later years as they suit him well. My top pick is his Cured suit as it has James Bond vibe at the start and the end of the episode. I find it handsome to be honest.

I love his questions as they are funny and I just can’t stop laughing at every question he asks. My favourite is “Are you in Cincinnati?” I love it and he is so handsome when he says that.

This a mixture o questions from S1 to S10

That is the first edition of a topic that isn’t Doctor Who related. Next month is a Double Bill and part of a challenge which K hope you will enjoy.

Thanks Danny for being BRILLIANT as the Cat.