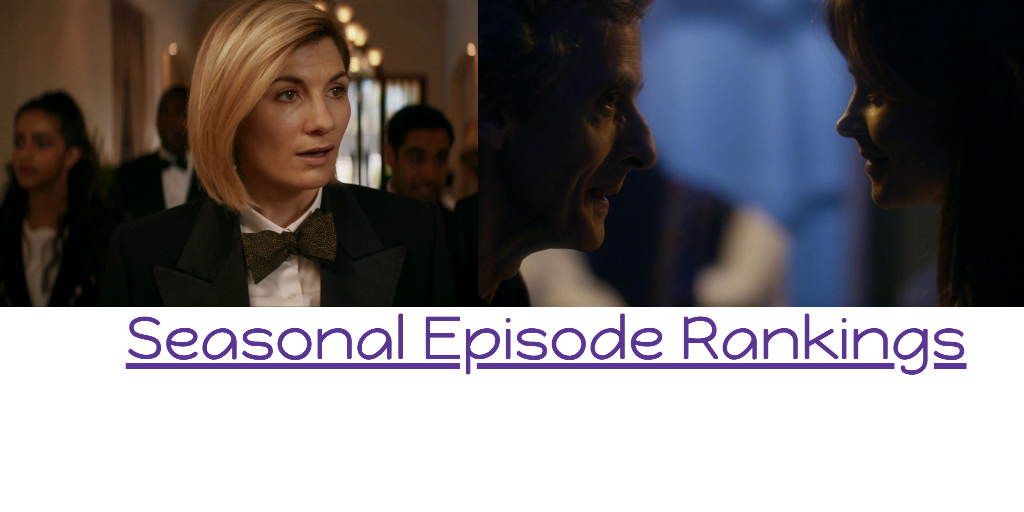 It’s CHRISTMAS and I thought I would share my Top 15 seasonal episodes including Spyfall as it did start on a seasonal day.

15. The End Of Time
It’s ok but it doesn’t match up to Matt and Peter’s regeneration buys but it has some moments. David Tennant gave it a good go but I just didn’t feel for him.

It’s ok but I don’t think it’s something I would watch a lot as there is potential but the lack of Amy and Rory doesn’t work for me as much. The Daleks.

I like this a bit more than I did but there were better parodies later on but the Doctor’s grief and his relationship with Nardole save it for me.

12. The Husbands Of River Song

It was an ok episode. The whole River thing didn’t work for me but it’s was redeemed by a strong last 20 minutes and the last few minutes were of the best scene of 2015.

I know people might not  like Donna here. I think it works as a one off and am glad they toned it down in Series 4 but kept bits of her angryness in because Catherine Tate behave some good angry vibes in then and as a proper companion.

People aren’t keen on this episode but I actually think it works will with Rose as the lead. I don’t love her whining as its a problem but she does come out of her shell on the ship but I would have loved to seen more from her. David Tennant came out like he was a proper Doctor when he recuperated. I actually don’t have any issues with some of his action because they bring some out and cause problems later on for him.

9. The Next Doctor
It’s a good story with a new kind of Cyber species and heartwarming moment between Jackson and his son.

8. Voyage of the Damned
I love the action packed disaster theme. There  are few hhhm not sure moments but as a story it works and the mix of characters helps the story along.

7. The Snowmen
A great episode with acting legends and emotional scene. Loved the Paternoster gang standing in but 11 was fantastic, it gets out of hand after but it doesn’t matter.

6. Twice Upon A Time

Apart from the sexism and comment, I think it’s a good story that gave the history making moment some edge. The last 10 minutes make it stand out more and Jodie’s first scene is a HIT.

5. The Doctor, The Widow and The Wardrobe
This episode is unfairly hated. I personally respect and admire the family theme in this episodes and I am glad as it was one of Moffat’s better choices in recent years. The last scenes are magical, memorable and emotional.

4. Time Of The Doctor

I love the fairytale vibe of this episode and Matt Smith did his nest performance apart from the sexual misconduct which is not his fault entirely. Jenna Coleman shined in this one and brought Clara’s perseverence when it was needed.

3. Last Christmas
Amazing episode. It did it’s job of reuniting the Doctor and Clara but the last few minutes are so memorable.

2. Resolution
Jodie Whittaker is my Queen as she gave me what she needed to do and Chris Chibnall took a huge risk and rightly so.

One, Two for Whittaker as the Bond pastiche worked in her favour. Love the whole thing. We have Sacha Dhawan as the Master. I just think it’s something special and mixing it up with tend rust female Doctor makes this a stand out. Two victories for Spyfall as it is the current favourite premier.