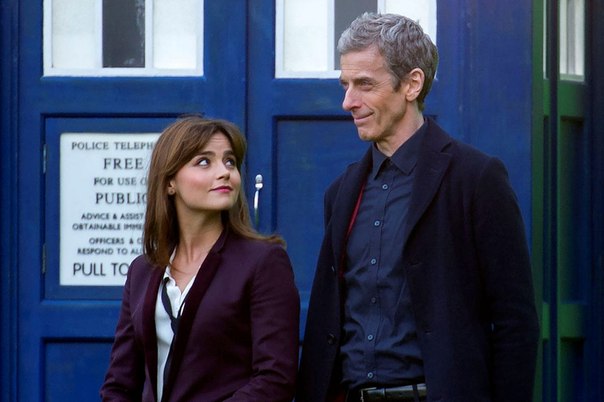 Leigh Talks is a new addition to the blog where Leigh Craddock will discuss her favourites and criticisms about things in Doctor Who. Twitter and Facebook users can contribute to this page and will be credited on the blog and social media. First  post in this new series is where she discusses her close connections to Twelve and Clara Oswald in S8 and S9.

I have a huge soft spot for Peter Capaldi and Jenna Coleman and from reviews, people will have noticed that these guys have recieved praise from me. Here is my take on the Twelfth Doctor and Clara Oswald relationship.

Their relationship is a journey throughout S8 and we see Clara learn about the Doctor’s new personality which is a great thing really payed off. My only critique is what where they we’re doing with Clara was too harsh with the Doctor by

– Why did she punch him?

– Walked out on him and listened to Danny Pink who was so annoying but the Doctor did do the wrong thing yet why Clara?

But Clara made a comeback to save their friendship both times but I prefer the second oneas she learned that the Doctor has a addiction to travelling after the Orient Express where she finally got the Doctor’s attitude to stuff and showed her promise in Flatline where she helped defeat an alien threat and helped saved the Doctor from dying in a shrinking TARDIS who got rid of the Boneless and made a new friend called Rigsy as well so not bad for acting in the Doctor’s place.

I want to talk about Last Christmas, before and during the episode, we didn’t know if Clara Oswald be staying but during the dream sequence, I just remembered the showcase trailer and there was a kiss and I was going, please Clara please and in the last scene, I was relieved an you have to respect that at that the point  Jenna only had one full season as she wasn’t in 4 episodes in S7 as well.

S9, I have a mixed opinion on S9 but for me Clara and Twelve should have had more screen time together and in Zygon, I felt it should have be just 12 and Clara, not Zygons, Bonnie and UNIT as for me, the episode is not my cup of tea and I wasn’t a fan of Clara having to be rescued which is one of my main criticisms of the series has Weaver the scenes together are more magical like in the Woman Who Loved, the last scene is so great and the way Twelve pats Clara’s arm, it works and for me, this what I was waiting for. I love development of Twelve and Clara in this series as we see the Doctor get concerned for Clara’s recklessness which causes Clara’s demise in Face The Raven.

I have been conflicted on the S9 finale for quite sometime and I have now placed it as my favourite finale as the chemistry from Peter and Jenna is still up there. Face The Raven is still is favourite of mine and the last 10 minutes are magical and the way Twelve and Clara is emotionally is better than the loud crying of Ten, Eleven, Amy and Rose as I get the relationship and it was on a night where my TV schedule was hectic yet I chose Doctor Who over the final half an hour of Junior Eurovision Song Contest and I am glad I did as the episode is so good and after the ep, I had a bit of a cry which was natural as it meant that I loved Clara so much.

I love Heaven Sent but for me I focus more on Peter and his acting skills than Clara being the voice. I am glad that Clara never overshadows the Doctor am this is very good point to make as in T Davies, certain episodes were overshadowed by returning characters and this is one thing Moffat has never done. The one scene we see Peter and Jenna together in the TARDIS in his imagination is great and Jenna just gives to her all and I will hopefully talk about in the Heaven Sent Review later this year and Peter’s face is so beautiful and I can connect to it.

Hell Bent is actually a great story  but once again the story of Twelve and Clara’s great and finishes sadly and it stops with heartbreak but happiness which is cool. The forgetting scene I have heard so many good things about despite some fans being negative towards Clara coming back and I am like, “If Rose can come back, why not Clara?” That is disappointing for me to see that as its beautifully done if though I don’t if it was the MOMENT for me a fan.

I am glad Clara had a cameo appearance in Twice Upon A Time and the Doctor finally remember however the sad thing is that the real Clara will never know her friend remembered her. They should have had more of Clara but unfortunately Victoria schedule stopped Jenna from doing so.

I love the scenes when Twelve is a gentleman to Clara, especially in Mummy On The Orient Express with helping her out of the TARDIS and offering his arm and in Face a The Raven when he kisses her on the hand goodbye which was Peter’s suggestion. That is why I call him the Gentleman.

Conclusion, I love this pairing and I am glad we got to see these guys together as they are one of my favourite pairing in the show and I love them so much and will always remember them as one of the best. Miss you so much ?!