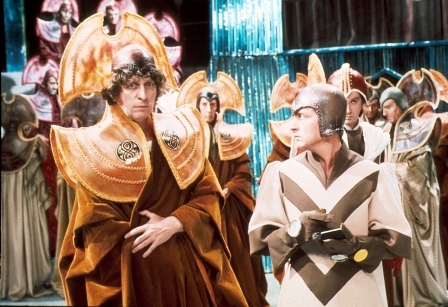 Previously, I spoke on how theTime Lords came into power by using a child (CRIME) We pick up on after the child lost their memory and were turned back into a child. Part two focuses on the first four incarnations of the Doctor after the memory wipe

Things were changing on Gallifrey. Not only the council ruled the planet in the Citadel but there was the Academy which Time Lord Children attended. More famous time Lord to attend were, the Doctor, the Master, the Rani and Drax. To get in, they would look into the untemeprd schism which was the time vortex. Some ran way like the Doctor but people who looked in to the vortex like the Master saw madness and led to her bad ways. They studies load of subjects and sports before taking a test to graduate.

Time Lords would later designed TARDIS’s to explore the universe. The TARDIS would be stored in the Citadel with their workshop in the same area. This is when the Doctor stole his TARDIS from.

The Time Lords began to be aware with the Doctor actions and put him on trial he needed help. He ended up being charged and the Time lords exiled him to Earth and force to regenerate.

Unfortunately the time lords forced the Doctor to do jobs for them and then return him down to Earth. In the end, he had to ask the for help when both Earth and Gallifrey were in trouble and the President of the Council decided to break the first rule of time to send help much to the Chancellor’s objections. In the end, the time lords forgive the Doctor after saving them from Omega.

The Timelords had a bit of trouble when they Lord President was assassinated by the Master who was attempting to regain his regenerative abilities and frame his enemy but it din’t work and even though there was damage, thanks to the Doctor dealing with master even though he escapes, still in his morbid state, there is minimal damage that can be fixed.

Later, the Doctor returned to Gallifrey to be inaugirated as Lord President on the wishes of the Vardans who wanted to take over Gallifrey but once they were, the Sontarans invaded gallifrey using the Vardans by finding and opening the transduction barrier but there leader was killed by forbidden Gallifeyen demat gun which took him and his crew out fo time and made everyone forgot the invasion.

THE STORY RESUMES NEXT MONTH1