10 things is back! I will choose 10 good things about a character’s era and explain why. The next character is the Thirteenth  Doctor played by Jodie Whittaker.

Jodie Whittaker as the first women to be cast as the Doctor. That’s a huge thing.

She is well know for being mechanical  like her Third Incarnation and was all to make her new Sonic Screwdriver.

She managed to take down Lord Byron’s romantic advanced but he did mention “She Was The Universe.”

5. She suits up well in a Tuxedo

She dresses up like a man when she needs to but does it in a stylish way. The fandom was so hyped up about this when the rumours began.

She cares about her fam more, especially in the Cyberman invasion, she cared about their safety more and that’s how you lead a team. 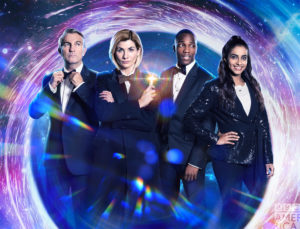 8. Learnt from her mistakes

When she gave the Lone Cyberman what it wanted, she immediately decided to fix it..

Loves a Historical figure and even can relate to them on occasion.

She is a supportive role model especially with people who impress her like when Silas fixed the teleported.

That’s 10 things I love about Thirteen. What things do you love about 13? Comment down below!