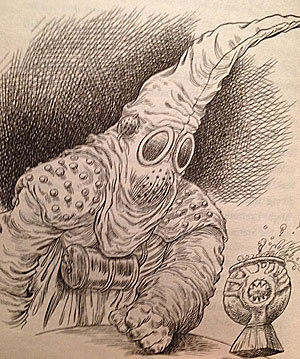 I’m going to talk about the importance of Maugin, a Termagant Trog who was the Stone Pilot of the Galerider, Stormchaser and Edgedancer.

Saving the Galerider from destruction.

She has done this in multiple occasion.

In the attempt to save Sanctraphrax and dethrone Most High Academ Vilnix Pompolnious, the crew went Stormchaser but things ended in a disaster when Twig was nearly killed by Slyvo and Mugbutt when they mutinied but were both killed by Hubble and Cloud Wolf was injured and the Stormchaser was caught in the Great Storm. Maugin and the surviving crew members except Cloud Wolf who stayed at the cost of his own life, she landed in the Twilight Woods and had a minor injury. She was nearly killed by Screed Toe Taker who killed Spiker and after member of the crew succumbed to their injuries but were saved in the Twilight Woods or suffered from Twilight Madness that made them stay in the Twilight Woods. She narrowly survived and helped fellow survivor Twig succeed in their mission which led to Vilnix Pokpolnious being overthrown by the Academics and Leagues and Maugin joined new recruits former Santrphrax Guard Bogwitt, Rescuees Spooler, Goom and Woodfish, Tarp Hammelherd and Wingnut Sleet on Twig’s new sky ship, the Edgedancer.

The Key to Saving the Edge

Maugin was told by Twig what happened on the Stormchaser before it was destroyed and Sanctaphrax was in the path of a Mother Stom and unless it was unchained, it wouldn’t reach Riverrise and life on the Edge would die out and not rejuvenate. After being told to keep her hood on, Maugin was sent like a shooting star to Riverrise.

Twig made it with Goom, Woodfish and his apprentice Cowlquape Pentaphraxis and told them the truth and suggested a risky move to allow to make it to Undertown in time. Twig and Cowlquape flew back to Undertown by Skyfiring and were able to make it in time whilst Maugin stayed with Goom and Woodfish to await Twig’s return.

After a disaster on the Stormchaser’s first voyage She was recruited by Gobtrax along with Quint and Maris to pilot the ship. She later learned that Maris was pregnant and after the birth of Twig, they were forced to abandon him in the Deepwoods with Splenda and Tuntum Snatchwood who adopted him as their own and loved him dearly. After a incident when a ill stricken Maris was nearly killed, the Leaguesman and his bodyguard are killed with the skychart lost with no way off them getting the boy back. Maugin later revealed this to Tweezel and revealed that she would rejoin the Stormchaser which was invested by Mother Horsefeather with hopes fo finding his son which they did.

I feel these are important as it shows Maugin is a well needed character and given a second chance in life and a trade a thee Stone Pilot. Her expertise made her take risks a lot like cutting the stone rock in half and holding on to the Flight Rock of the Galerider that put her out of actions for months. She also knew the truth of life on the edge being destroyed if Sanctaphrax wasn’t unchained thanks to her Hood.

That’s why Maugin is important in the Edge series. Comment down a character from a novel that you think has an important role in the series.