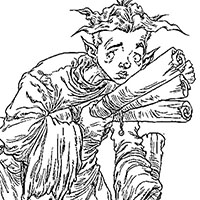 As I did for Maugin, I will be talking about why Cowlquape Pentaphraxis. He was well known Most High Academe who was a former Sub Acolyte who later became the Apprentice of the famous Sky Captain Twig. He is related to High Leaguesmen Ruptus Pemtaphraxis and he father was a Leaguesman as well.

Cowlquape always often went to the Library when being from Vox Verlix and would of read the a myth of Riverrise which would lead him to idolise Kobold the Wise who founded a Riverrise. The reason his obsession is important is that in his journey with Twig, he would have dreams and later on after two near death experience from Flitterwaifs and a big fall following Woodfish. He has a dream of Kobold who reveals the water is good to drink and they’re at Riverrise.

He was given the title to of Most High Academe by the Professor of Darkness who held the potion at the time trying to stop him from unchains Sanctaphrax but wa unsuccessful. Cowlquape’s time was a rollercoaster as he was ursurpered form power by Vox Verlix  when another great purge occurred. After every suffering many years in the Tower Of Night and being rescued, he reclaimed his power thanks to the Librarian Academic who went into hiding. After learning stuff from Vox, he was able to convince the Librarian academics to leave the Great Library underground and go to the Freeglades, despite Vox attempting to kill them, Cowlquape’s actions allowed to escape alive and leave for the Freeglades and became a members of the Freeglades Council

Apprentice of a Sky Pirate

After learning he would lose his Place out of Sanctaphrax, Cowlquape would go into hiding to avoid being cast out. In one of his encounters with Vox Verlix, he saw the new Sub professor of light attempt to jump from Sanctaphrax and suddenly saved him without thinking and that incident changed Cowlquape’s life as Twig saved his place at Sanctaphrax by taking him on as his Apprentice. Cowlquape later joined Twig to find his crew on a dangerous quest which was near successful as Twig saw every member of his crew but had to leave 3 members to save Sanctaphrax with Cowlquape who volunteered to go with him by sky firing it’s both surviving the experience. This experience made twig and Cowlquape good friends

In his life, he experienced the success an hardships specially in the Deepwoods and Nightwods. He tried to be a good High Academe which unfortunately ended up being trapped in the tower of night. He was later freed by the Skyraider, by his old friend and Rook Barkwater, a Librarian  knight and Group  of Banderbears in a battle that saw Twig being mortally wounded and the deaths of three of the banderbears. Whilst he was in person, he managed to change the live of Guardian Xanth Filatine who would visit Cowlquape to listen to his stories Of his adventures. Xanth earned  has redemption later on after tough experiences after his Freeglade visit as a spy for Orbix Xaxis made him feel guilty whch changed his life forever and would later start the Third age of flight thanks to Cowlquape.

I find Cowlquape an important character as he come across as a student not well loved as his dad’s a leaguesmen but his life changes after saving Captain Twig and his experience changes his world but also he influences the radical change of Xanth Filatine who saves the life of Magda Burlix who was also a prisoner in the Tower of Night. Also, he would later change the lives of the Librarian’s academic after they take him in. He is a caring character in his later years and hat’s how people resort him more.

That why I think Cowlquape is important. character in the Edge Chronicles.

Comment down a character from a novel that you think has an important role in the series.