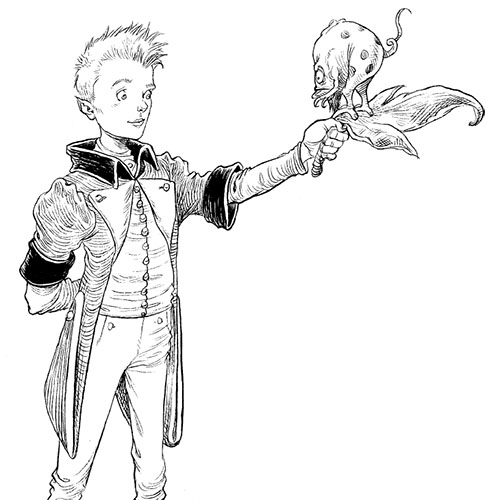 The Edge Chronicles is a 13 book series with 5 protagonist with majority of them having a trilogy except one and 2 standalone books. These are written by Paul Stewart and illustrated by Chris Riddell who I met when I was at school.

How did I Start?

I started at school for an activity book where my teacher read he book in front of my class and got tthe chase to meet the authors.I did borrow buy books but didn’t read them till last year when I reread Beyond The Deepwoods myself then i attempted to start the winter Knights and Freegalder but i stopped after being overwhelmed. I returned series after a library trip and wa saucily to find the first book that I had borrowed before which was The Curse Of The Gloamglozer and it had a short store which a few of the stories had included in their revamped version of the series which were originally in The Lost Barkscrolls. I continued the series and finished all of the regular series in June 2020.

Here are the the 5 main protagonist the series follow

Quint Vergenix (Also in The Sky Chart) – Owner of Tash, Deckhand on the Galerider, Right had Man, Knight Academic, Later Captain Cloud Wolf of The Galerider and Stormchaser

Cade Quarter –  Owners of Rumblix and Ruffix, Councillor Elect of the Free Glades

The Lost Barkscrolls has Quint in the lead role of Cloud Wolf but there are 3 o ther stories with a different lead. These are

Maugin is a Terment Trig that failed to turn teremgent after being captured by traders and was rescued by Quint. The slavers wanted her back and attempted to destroy the Galerider by killing Ramrock the Stone Pilot and Garum Gall but Maugin who intrigued by the Flight Rock saves the day and became the New Stone Pilot for the Galerider being on of the best in the trade and served multiple sky ships and was instrumental in the fate of Snactraphrax

Keris was raised by her Uncle Gristle after Twig went to search for Riverrise and hr mother Sinew’s death. She joined the Webfoot Goblins to seatrch for answer where she landed in he Freeglades were her life changed again.

Rfus joins the Freeglade Lancers and struggles to earn his blooding and is instrumental into defeating Lentil Spume.

Professors of Light and Darkness

I will now give my options n each fo the individual boos and what i think of the series.

Love this.Young Sky Pirate in a place of secrecy and intrigue, find himself embroiled in a dangerous secret. Conspiracies and killers, it kind of comes together and leaves on a cliffhanger which is prominent in the series.

Love Quint here, I like the way he is put into a new world. Vilnius Pompolinous is intorduced well her, setting the scene for his role in Stormchaser.

Clash of the Sky Galleons

Loads of deaths, Quint becomes Sky Captain, love the whole war between Sky Pirates and Leaguesmen. The Stone Pilot is the star. Love her and later has a more prominent role in the next trilogy.

Twig is probably the bets lead and I love this story which is prominently in his character arc as we see him explore new things and especially in this story as he discovers his life lies Beyond The Deepwoods.

Apart from the mutiny, this a great story. I love Quint going on what he was wearing rot do until the Most High Academe cut his chances by forcibly ursuping to power but Quint is bit too hard on his son though. Twig goes through errors to become a hero and becomes Captain of the Stormchaser after cloud Wold refuses to abdonon ship and i like they way twig is determined and even though he loses more memormebe of ship rew, one murdered, to die form injuries they sustained during espca ebut were immune in the Twlightwoods and two lured to insanity in the twilight woods (one survives), he is left with the injured Stone Pilot who reveals her identity as Maugin and Termenant Trog who never transforms. It’s a happy ending with a certain character being killed for his treachery and Twig forms a a new crew for his ship Edgedancrr which i love as they are crucial in the next story.

My favourite story fo the franchise. Love the Quest stories. Plot well used from the beginning. Riverrise storyline starts and it’s robelm one prof the most intriguing places to read about. Love Cowquaple and he is a legend

Last of the Sky Pirates

I love the huge gap in years and things have changed since Cowlquape came Most High Academe. Rook’s story is sad but I love the fact that is eh given the chance to do something better anf this leads to a near death experience high saves him later on and meeting Captain tWIG. The en is sad but sweet, Cowlquape is rescued but three banger ears ar killed and Twig is mortally wounded and is taken to Riverrise were things get worse and a reunion becomes a tragedy.

I love the whole clashing and it all leads to the three ba guys getting theur coompuupance in the penultimate chapter. Its such a funny scenario. Rook has a bad time butthe fact he gets out fo ti in the end when he acid melt cause Vox’s maelstrom but luckily everyone gets out but it gives him and his friends a good start whilst Xanth Filatine changes his ways which is prominent in the final book of the trilogy.

I love the tea of everyone moving away. Xanth gets mistreated  a lot in the second half and he doesn’t deserve that I am angry and certain characters so like Tweezel, I do feel for him. He and Rook find ther calling. Varies Lodd’s death is moving and hello Felix and his dad reconcile but it’s still sad btu she is a hero and later, Zelphius Diax names his scyscraft after ther.

This book is the longest and split in four parts. This was meant to be the last book but they decided to introduce a new trilogy with several characters of this book making a reappearance  Nate, Eudoxia, The Professor, Zelphiyus Dax and Quove Lentid who has a more prominent role heoughout the series.

I love Nate’s story as he tries to making  a new living and makes new friends along the way including saving Slip who worked at the same phraxmjne at him after he warned him about Gritn Grayle, Eudoxia and Galston Prade, The Professor, Weelum, Cirrus Gladehawk and Squall Razortooth and their adventures. Most of it is, the group together but the third part is mainly just Nate, Gilmora and Gomber trying to save the life of Eudoxia and Twig, Rook and the Caterbird’s return but you also have the aftermath of the Hive/Great Glade Battle cause a revolution at Hive and Zelphius Dax actions cause problems for Felftis Brack and Branxford Drew who gets the comeuppance. The last chapter concludes the original three’s stories and the defeat of the Gloamglozer who had been plaguing the edge since the first book andthe start of Nate and the Professor’s descending experience leads to the next lead’s life in danger

This is my least favourite trilogy in this series but ther are loads of elements i love.

I love how Cade is looking d a new life and he meets new friends like the Helmsof family, Thorne Lammagyre and Gart Ironside and he becomes a hero saving the lives of Tug and raising Rumblix the pedigree prowlgrin.

I love the introduction of Phineal Glythifth and the whole need of weapons but I am wasnt a fan fo them losing their weapons they earned. It just didn’t work for me and I felt disappointed with the fact that it as a rescue mission.  Love the return of Eudoxia at the end

I like the recaps and throwbacks but I felt it was too long and ther were some bit that kind of irritated me but they were fixed by all the villain’s defeats just like the Immortals. I was sad at the death of Rumblix, he didn’t serve what he got. Love the Descending chapters, it was nice to learn about Groundrise.

The mini stories are great. I personally love The Slaughter’s Tale but I am not a fan if The Sky Chart.

I would recommend this series. It’s good and you can start at any trilogy.