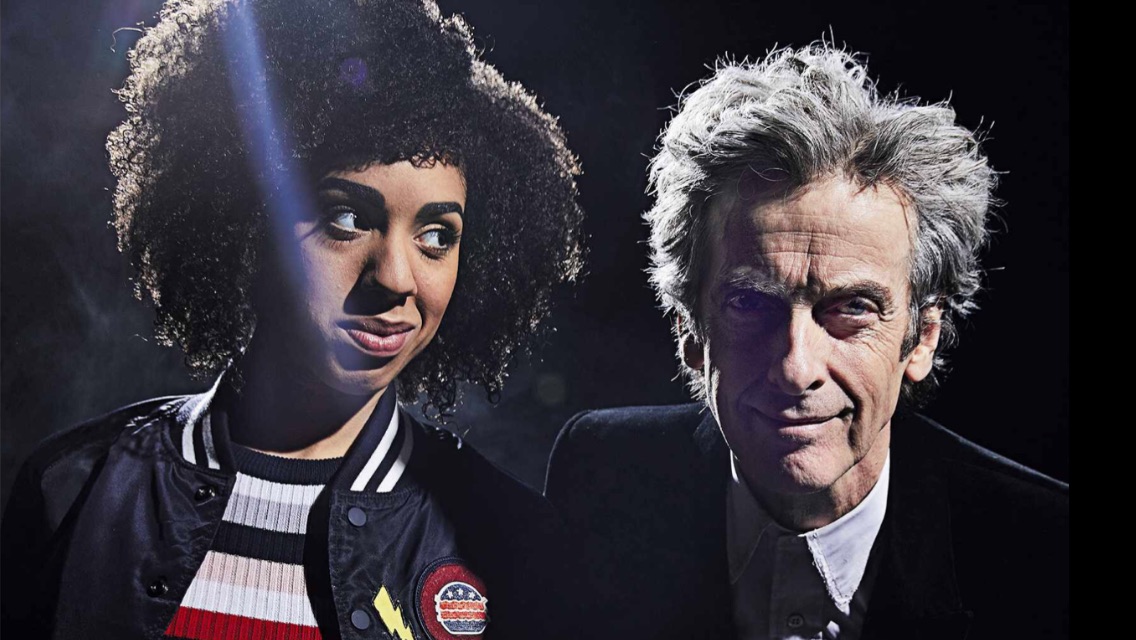 Series 10 was broadcast in 2017. Peter Capaldi had announced the broadcast date, the same time was he announced he was leaving which I was sad about and would later be replaced by the firs female Doctor, Jodie Whittaker. Also S10 was a piece of history as Pearl Mackie’s Bill Potts was announced to be the first LGTB companion.

Peter once again improved in development with just 2 minor hiccups in the second half. I think he was enjoyable and The Doctor Falls, this was his best performance dpesite that the first scene, i feel more relatable to the guy and his story kind f comes full circles, especially with this speech which I have talked about in this little blog

Pearl was amazing, especially in te first half but I struggled to lover her in the second half, especially with 3/6 episodes. I just felt she betrayed the Doctor’s try but sometimes he does too. I think she was a great LGBT ambassador but I felt that she should one girlfriend instead of two and it would have been a better job. Heather and Penny were good but didn’t deliver as much but I give Steven credit for a good attempt. I just feel that LGTB needed better representation this time and that’s is why future series have time to clear up on past mistakes like in Praxeus with Adam and Jake but Pearl did well in the reminders but it did sometimes went over the top but the actual relationships just didn’t come out right in a way I could connect and enjoy. I still disagree with her fate, she deserved better. I think this kind of makes me frustrated with Steven and it starts to get boring with killing and bring them back so she deserved a better exit.

Matt Lucas played Nardole. I felt he definitely improved over his initial first appearance and was better as a regular. I found him funny and adorable but sometimes he was a bit too rude. I think Nardole would be better if he had a main role as he we hardly in eps 1 to 4 and 9 and every other regular has been in more scenes and I feel that its a bit unfair to see one companion being ignored and that’s not cool. I understand it was for the story arc but yeah he would could haven more loved if he had more screen time but love the character.

Two Masters This Series, current Master Michelle Gomez with the Vault Story Arc and John Simm in the finale. Missy’s storyline was more intriguing and I enjoyed it. Missy crying and concern was unusual but The Doctor Fall sealed the deal. Regardless of the fate, whoever Sacha Dhawan’s Master comes after which be divisive but I can side with both reason. John’s Master was ok but his Master had kind of didn’t feel right but it was a good job.

Story Arc this series was the Vault. The mystery should have lasted longer to maximise the impact cause Steven issues is some fo his story arcs should have been better and that’s just me being fair.

The episodes actually quote consistent but there were a few THAT left me dis with the regulars and that’s not a good sign and o feel threat tram work should have been better and they DESERVE BETTER! WHAT IS WROING WITH YOU GUYS? COME ON! But mu favourite was Oxygen, good start to a twist which sadly lost its momentum. WHY?

3 things I would change

3. Better representation (It needs something more)

Not a bad series but nota perfect series but it’s shame cause Peter deserved a BETTER LAST SERIES LIKE MATT!